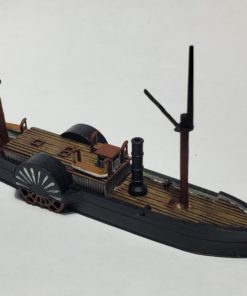 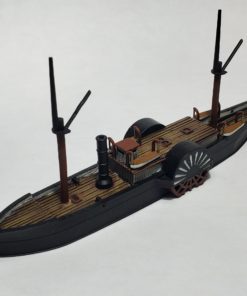 Once again a civilian steamer bought by the Navy. Prior to her purchase, she was chartered by the Navy to search for the commerce raider CSS Sumter and Confederate blockade runners. Her charter expired before Sumter was found, and she was then purchased by the Navy and was sent to continue her search in the West Indies. Still failing to find the raider, she was assigned to the blockade around Charleston where she would capture several blockade runners and battle the ironclads Chicora and Palmetto State in their raid to break the blockade. She was then sent to the blockade around Wilmington where she would capture several more blockade runners, and then proceed to aid in the attacks on Fort Fisher. Once the fort fell and Wilmington was captured, the Navy’s purpose was essentially complete, and Keystone State merely patrolled off the North Carolina coast doing clean up work. Her final action would be towing the monitor Montauk to Hampton Roads. She was sold at auction and returned to civilian service until 1879.

USS Keystone State with base

Be the first to review “USS Keystone State” Cancel reply