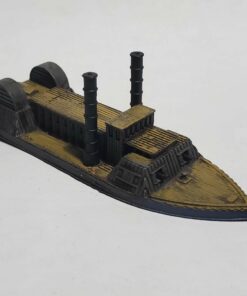 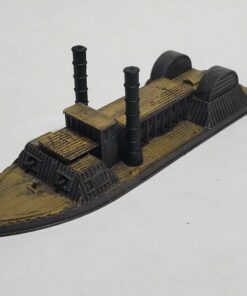 Indianola was purpose built as a casemate ironclad in Cincinnati, Ohio and named for the city of Indianola located in Iowa. She had quite an interesting design, being powered by both side paddle wheels and a pair of screw propellers. Being threatened by Confederate activity in Kentucky, the ship was seized by the US Army in order to expedite her completion, however she was still armed and launched incomplete. After the Confederate threat had passed, she was surprisingly returned to the shipyard and was officially completed for service. She would report to Cairo, Illinois in January 1863 before being sent downriver to participate in actions taking place around Vicksburg. Here she would assist the ram Queen of the West in harassing Confederate shipping on the Yazoo River. After Queen of the West was captured, Indianola blockaded the Red River before withdrawing due to a possible attack to be made against her. She was indeed attacked, by her own former companion, the repaired Queen of the West. Indianola was forced aground after being rammed several times. After learning that salvage attempts were being made, a dummy ironclad named Black Terror was constructed and floated downriver. The ruse was successful and caused the Confederates to abandoned their salvage attempts and destroy the remains of Indianola. The wreck was raised in January 1865 and sold for scrap.

USS Indianola with base

Be the first to review “USS Indianola” Cancel reply