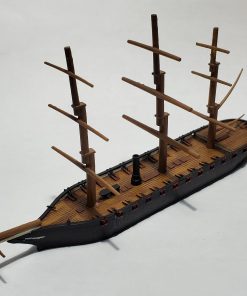 USS Hartford was launched in 1858 and upon her commissioning sailed for the Cape of Good Hope and the Orient. Upon reaching the Far East, she relieved USS Mississippi as the squadrons flagship. Upon the outbreak of the Civil War, she was placed under the command of Flag Officer David Farragut and served as his flagship for the duration of the war. She would participate in all of Farragut’s exploits, including the capture of New Orleans, Vicksburg, and the Battle of Mobile Bay. IN order to capture New Orleans, Hartford would have to make the run past Fort Jackson and Fort St. Philip. During her run, she was very nearly destroyed as she dodged a ramming attempt by CSS Manassas but in doing so was hit by a fire raft and was engulfed by flames. Her crew was able to extinguish the flames and she continued to force her way past the forts. Soon after the capture of New Orleans, Hartford took part in the capture of Vicksburg. Once the Mississippi was completely open to the Union navy, Farragut turned his attention to the city of Mobile. Hartford would go down in history during the Battle of Mobile Bay, as after watching the monitor USS Tecumseh sink after striking a torpedo, and under heavy fire from Fort Gaines and Fort Morgan, Farragut would utter the famous paraphrased quote “Damn the torpedoes, full speed ahead!” She and the rest of the fleet would then enter Mobile Bay and eventually would cause the surrender of both forts and the Confederacy’s most powerful ironclad CSS Tennessee. After the war, Hartford was assigned to cruise the Pacific with several decommissions and recommissions until a rebuild starting in 1894. After her rebuild she was sent to the East Coast to train Midshipmen until 1912, and then was placed in Charleston to serve as a station ship. After a final decommissioning in 1926 and a move to Washington D.C. in 1936, where President Franklin Roosevelt had a grand plan to construct a museum involving USS Hartford, USS Olympia, and a WWI four-stack destroyer. Unfortunately when Roosevelt died in 1945 his idea for the museum when with him and all plans were abandoned. She was then towed to Norfolk, classified as a relic, and was left to sit. Due to this neglect, she began to deteriorate and sank at her berth in 1956. She was determined to be beyond any feasible repair and was dismantled.

USS Hartford with base

Be the first to review “USS Hartford” Cancel reply