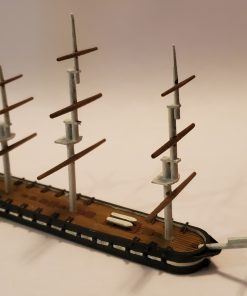 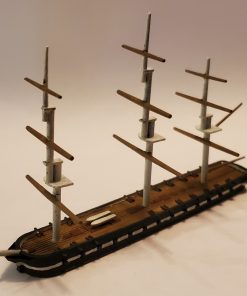 USS Congress was built in 1841 after the original Congress was scrapped in 1834. She served around the world in the Mediterranean, South Atlantic, saw service in the Pacific during the Mexican-American War, took part in suppressing the slave trade along the coast of South America, returned to the Mediterranean, and returned home when the Civil War broke out. Congress served in Hampton Roads as part of the Union Blockade. She was anchored off of Newport News when she was attacked by CSS Virginia, the loss of her ram and heavy fire from shore batteries prevented Virginia from getting in too close, however she fired upon Congress from long range, inflicting heavy damage and killing her captain. Congress was forced to strike her colors and surrender however due to the continued fire from shore Virginia was unable to claim the prize. Instead, in an act of defiance to the shore batteries, she fired several red-hot shot into Congress, burning her to the waterline before her magazine exploded and she sank to the bottom of Hampton Roads. The hulk of USS Congress was raised in 1865 and sold for scrap.

USS Congress with base

Be the first to review “USS Congress” Cancel reply