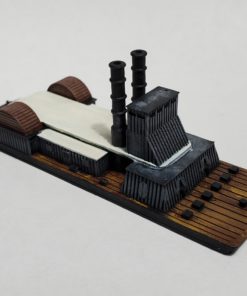 Busy on the Mississippi!

USS Chillicothe was laid down in Cincinnati and commissioned in September 1862. She remained stuck on the Ohio River for four months after her commissioning due to alterations, and low water. Once she was able to leave the Ohio, she was immediately employed on the Mississippi River and its many tributaries. She would join many expeditions along the Mississippi, including the White River expedition, Yazoo Pass expedition where she was heavily damaged, and the Red River expedition where her commanding officer was mortally wounded. After her military career was over, she was sold in November 1865 and served as a civilian ship somewhere around the Mississippi River until she was destroyed by a fire in 1872.

USS Chillicothe with base

Be the first to review “USS Chillicothe” Cancel reply