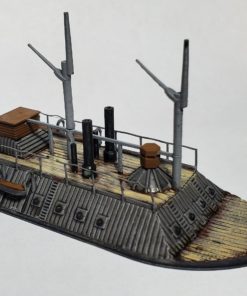 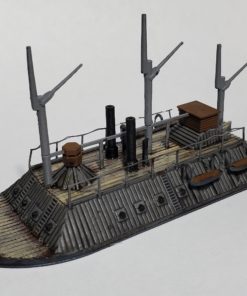 One of James Eads’ first wartime conversions, Benton was converted into her ironclad configuration from a catamaran centerwheel snagboat meant for raising sunken steamships called Submarine No.7. The hulls of the ship were divided into 7 watertight compartments, revolutionary for the time, and Eads reported that she could take up to 20 penetrating shots in up to four of these compartments and remain afloat. It is not known if this boastful statement was ever true. Once converted and renamed to Benton, the ship would steam down the Mississippi and take part in several battles including Island No. 10, Plum Point Bent, and Memphis. She would also engage with the ironclad CSS Arkansas. Like every other ship on the Missisippi, Benton was eventually sent to Vicksburg in 1863 to aide in the campaign. She would run past the batteries at night to lead a fleet to bombard Grand Gulf, Mississippi taking a moderate amount of damage in the process. Once she was repaired, she was sent to aide in the ill-fated Red River campaign and would be stranded on the river as the army retreated due to low water. The fleet would eventually save itself by constructing dams across the river, destroying them, and be swept to safety with the rush of water. After the Red River campaign, there was very little for Benton to do. All significant Confederate resistance on the Mississippi had been destroyed when Vicksburg fell. Her last notable achievement of the war was steaming back up the Red River to capture CSS Missouri, which had been stuck on the Red River for the entire war. After the war, Benton had her armament and armor stripped and she was sold.

USS Benton with base

Be the first to review “USS Benton” Cancel reply