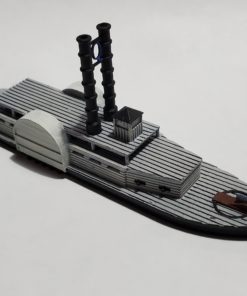 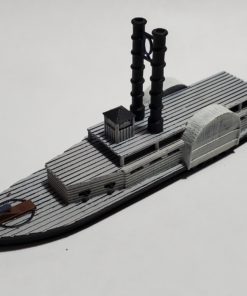 US Ram Queen of the West

Fought everywhere around the Mississippi!

Report an abuse for product US Ram Queen of the West

Orignally built as a commercial steamer, Queen of the West was purchased by Charles Ellet and converted into a ram, with no other armament. She operated as Ellet’s flagship in his ram fleet. Queen of the West and the rest of the fleet would cause the destruction of the Confederate River Defense Fleet at Memphis, and would engage with CSS Arkansas while supporting actions around Vicksburg. During her duties around Vicksburg, she accompanied USS Cairo up the Yazoo river and rescued many survivors when Cairo struck a torpedo and sank. After returning to the Mississippi, she was equipped with a 30-pound gun, several howitzers, cotton bale “armor” and was sent to run the gauntlet past Vicksburg to join Farragut’s fleet below the city. She successfully made it past the Confederate guns and joined up with the fleet. En route, she came across City of Vicksburg docked, so she proceeded to ram and critically damage her. While on a mission up the Red River with the De Soto to capture a steamer loaded with corn. While on the river, she also went to investigate the claims of more steamships farther up river. She encountered heavy fire before reaching them, and was forced to be grounded and abandoned. She was then captured and placed into Confederate service as CSS Queen of the West. During her Confederate service, her only notable encounter was the assist in the capture of USS Indianola. Several months after this encounter, she would be attacked by three Yankee ships on the Atchafalaya River and was abandoned when her cotton bale protection caught fire. Her wreck would drift downriver and explode soon after.

USS Queen of the West unarmed

USS Queen of the West with base

USS Queen of the West unarmed with base