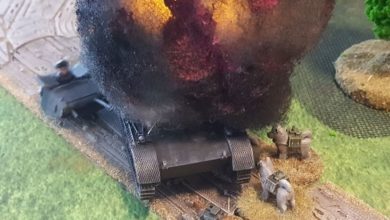 This is a 28mm model of a WW2 Soviet Anti Tank dog. If you are not familiar with the Red Army’s use of this weapon, here is a good overview:
https://en.wikipedia.org/wiki/Anti-tank_dog
This model can be used with the Bolt Action gaming system. I play a Soviet Army in the game, and the Red Army has a dearth of anti-tank options (no panzer-shreks, PIATS, bazookas, etc, and only limited #s of captured panzerfausts later in the war), but one asset is the anti-tank dog. The problem is Warlord Games sells them as a pack of two dogs and two handlers; the handlers have nothing to distinguish themselves from any other Soviet infantry, so you end up paying $15 (Cdn.) for two dogs… I thought by creating a 3d option, I could expand my dog team.
Please be sure to use supports when printing, and due to the model’s small size, use at least a fine (0.1mm) layer on filament prints
When printing, as always, be very careful removing supports – it is tricky as the supports are under the torso and between the legs.
I put it on a 25mm base; in the photo my base sits a little higher as I glue a 1″ metal washer under all my bases, as I used a magnetized storage system.

Copy and paste this URL into your WordPress site to embed

Copy and paste this code into your site to embed