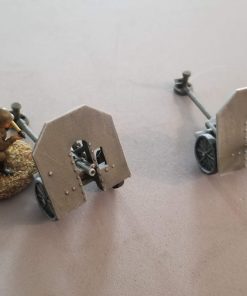 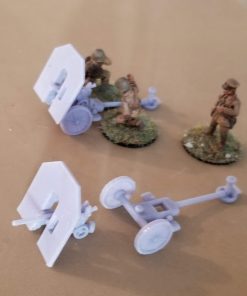 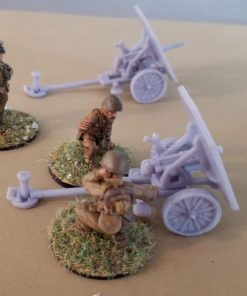 The interwar period saw most of the world’s military’s suffering from limited funding. This caused many weapon developers to design weapon systems that could fill multiple roles; hence we see aircraft that double as both a bomber and a transport (e.g. – the Ju-52), or fighter / attack / reconnaissance (e.g. the Italian Ba-65) or tanks that include a wheel conversion so they could act in the role of armoured cars as well (e.g. – the American Christie and Soviet BT series, the Swedish L-30).

There were examples in artillery as well, the most relevant for the bolt Action player is the Skoda 37mm / 70 mm Hybrid gun system. This weapon is in the army list of the Bulgarian army. Although the Bulgarians are a are a rarity on the tabletop, to the best of my knowledge no one has covered this weapon. This weapon came with two barrels; a 70mm barrel for firing HE, and an 37 mm anti-tank barrel that was inserted into the 70mm barrel to fire AT ammo. The gun (and hence the model) was small; the Czech document in the link notes the 70mm barrel was <90 cm.; the AT barrel was < 130 cm.

The drawings on the page in the Bulgarian language shows the field piece both deployed and then disassembled and placed in the back of a wagon; the wheels were steel and would not have been suitable for be trailed for long distances on the roadway.

I did up this .stl pack to be only suitable for resin printing; I could not design it for FDM printing; the model is just too small and detailed to have any hope durability I would want to see.

In the photos I used crew from my Polish army, my Bulgarians are still in the planning stage. The .stl package comes with the gun carriage and two gun / shield combos- the longer barrels ATG and the short barrels 70mm Infantry gun. You can print one carriage and switch the guns out during the game, or simply print two complete guns and switch them dependent on which weapon you announce to be using in each turn (as per the weapon rules in the Bulgarian selector).