This is a Sikorsky S-58 helicopter, in US service referred to as the H-34. 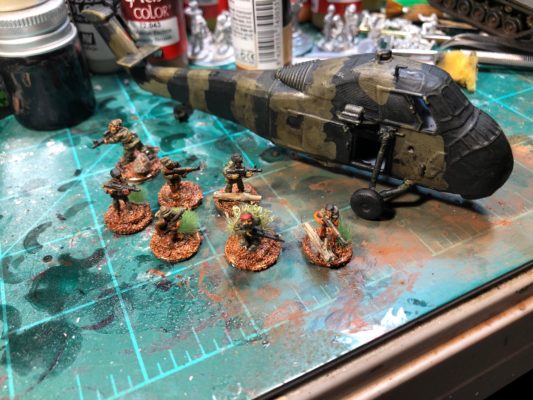 The Sikorsky S-58 was adopted first as the Navy Anti-Submarine Warfare (ASW) version SH-34J in 1954, followed by the US Army as the H-34A in 1955, and the US Marines as the UH-34D (HUS-1) in 1957. Eventually, the US Air Force, US Coast Guard, foreign militaries, followed. There were licensed variants produced France, Great Britain, and Italy. Over the course of some 25 years, a total of 2,300 aircraft were produced. It was a favorite of Air America pilots during the Secret War in Laos (Operation Momentum) and carried President Eisenhower as Marine One. Perhaps its most famous role was as the “Kingbee” aircraft flown by South Vietnamese Air Force pilots which carried MACV-SOG recon and hatchet teams in Laos and Cambodia.

The model here includes separate files for the body and tail, the rotor head, and the rotors. It has space in the fuselage for a door gunner. It was printed in resin on an Anycubic Photon. As such, it has already been hollowed for that purpose.

Be the first to review “Sikorsky H-34 Helicopter” Cancel reply