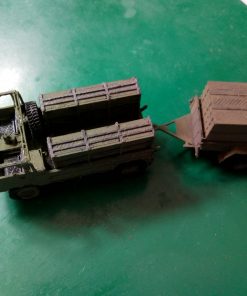 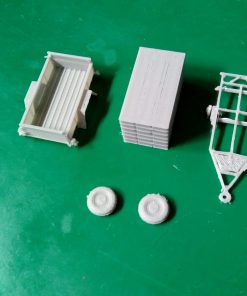 The Rapier anti-aircraft missile system has been used by several armies over the past decades, and continues in service. Models of the missile launcher and radar are available on this site, and this trailer, with its resupply missile containers, is a further component of the overall Rapier system. Further details of the system can be found at http://www.primeportal.net/artillery/gunther_neumahr/rapier/, with system details at https://forums.lr4x4.com/topic/69524-rapier-trailer-information/.

This trailer is normally towed by the 1-tonne Land Rover 101 (also available on this site), and provides the immediate resupply of missiles to launch units. Nine missiles are carried in the trailer, with a further four in the back of the LR101, as can be seen in one of the photographs of the completed model. The trailer was specially designed for this task, though it drew on similar trailers already in service, and it can be used as the starting point for similar models.

The Rapier resupply trailer model comprises a chassis and body, with separate wheels and resupply missile container stack. Whilst dimensions are kept as close to scale as possible, some thickening of walls and girders has been required to make the model more reliable printable. There were some variations in this trailer, and some were fitted with jerrycans in front of the mudguards, which can be easily added to this model.

Be the first to review “Rapier resupply trailer” Cancel reply