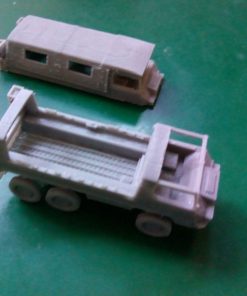 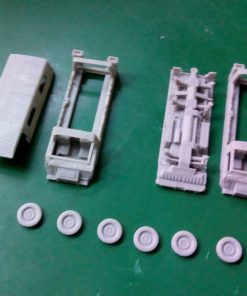 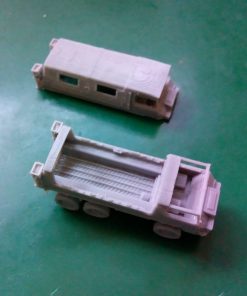 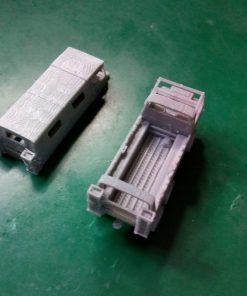 Two versions of the Pinzgauer were manufactured by BAE Systems in the UK, a 4×4 (available as a separate model) and a 6×6 variant (this product). The design was originally developed by Steyr-Daimler-Puch in Austria. The British version has a modified bonnet (hood) to improve cooling, but otherwise uses the same tubular chassis, which gives it excellent rigidity and cross-country performance. The 6×6 variant has been used as the primary towing vehicle for the Rapier and 105mm light gun, though the 4×4 variant is also deployed. Further details can be found at https://en.wikipedia.org/wiki/Pinzgauer_High-Mobility_All-Terrain_Vehicle and https://www.pinterest.co.uk/pin/346777240037403274/.

The vehicle is provided as an alternative towing vehicle for the Rapier missile system, including the Blindfire radar, and the 105mm light gun. All three are available as models on this site. It is in current use (known as the ‘Pinz’), with the 6×6 version offering extra rear compartment space to carry ammunition or tracking components. The truck has built up a strong reputation for its agility and reliability, and is popular with the troops. It has some limitations in carrying Rapier missile containers due to volume constraints, but is otherwise very capable.

Printing and construction is relatively straightforward at 0.1mm layer setting. The chassis should be printed with the axles facing away from the print bed, and the body in normal horizontal orientation. Some care needs to be taken in removing supports on the handrails on each side of the cargo compartment, and clearing the windows in the cabin. The wheels are provided with lengthened indentations to match the suspension axles, but these may prove difficult to clear, and some fitting may be needed at this scale. The version provided is LHD, to suit British Army issue. A separate tilt is provided for the model, which should be used with the alternative top, as this has been modified to ease assembly by the removal of some features. The tilt may still require a small amount of fitting if printing imperfections are found on the inside of the tilt.

A problem was reported with one of the files, so I have added a second zip file with corrected and cleaned versions of the main 6×6 files, exploiting a new methodology to reduce the number of face inconsistencies. Apologies for the issue – one of the files seems to have been corrupted.