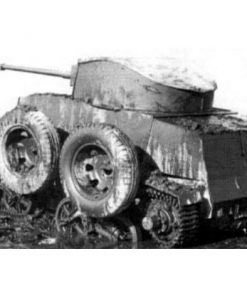 ** this file has been reworked with new tracks, with added track detail and improved printability – January 27, 2021 **

This is an original file I created at the request of this site’s (wargaming3d.c0m) creator. It is a very real tank and demonstrates the ingenuity that can be sparked by crisis.

It is offered for free download to spark your own creativity in Bolt action scenario design.

This is a 28mm model of the Schofield tank, a tank designed and built in New Zealand in the dark days after Pearl Harbour when it looked as if the country would be cut off from outside help. New Zealand was a country of just over 1 million people, and its trained forces were already in the Western Desert, fighting with Commonwealth Armies. Things were so dire they even designed and built the Bob Semple tank (Bergman has that as part of his treasure trove).
The Schofield was a much more serviceable design, although that was a fairly low bar to reach. It was designed on a truck chassis, and had the odd yet not entirely uncommon wheels and track combination, wheels were used for road travel at high speed; the change over only took a trained crew a short time and the vehicle then operated on its tracks in combat.
This file was designed entirely from scratch, except for the tracks, which I adapted from Jarlang’s excellent Vickers Four Ton Tank series. I had to add sections of track to stretch the tracks out and dropped the forward idler wheel and added coil springs to the bogie pairs.
I designed it with a closed turret, there are many photos of it being tested without the turret hatch, but there are photos showing it with a turret hatch, and i am sure that is how it would have gone into combat, had it done so.
It was armed with a 2 pounder ATG and a coax medium MG. Its armour would count at a +7 in the Bolt Action Vehicle Design System, and would run at 105 points for a regular crew vehicle – 50 points for +7 armoured vehicle, 50 points for light ATG and 5 points for coax MMG.
A good read on the vehicle can be found here:
https://forum.warthunder.com/index.php?/topic/423280-schofield-tank-bob-semples-big-brother/