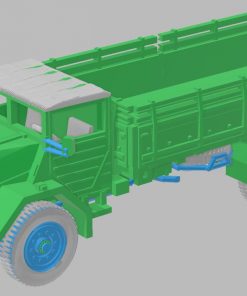 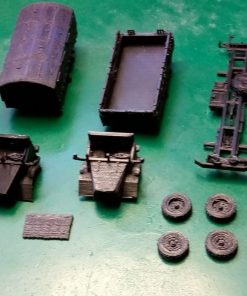 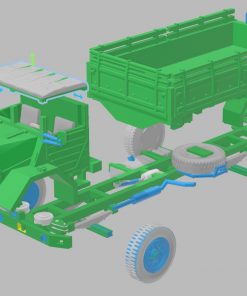 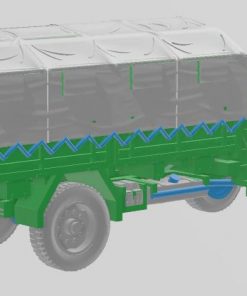 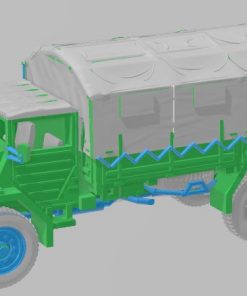 1:100 model of the West German MAN630E truck, with versions for SLS and FDM printers. Both open back and tilted versions included. This is the version with winch.

The West German post-war MAN 630 5-ton truck, nicknamed ‘Emma’, was introduced in 1958. It was a sturdy and almost indestructible design, drawing on Wehrmacht experience during WW2. It was manufactured until 1972, with the military L2 variant being the most common. This was produced in two major chassis versions, the L2A, and the L2AE with single rear tyres. It was used by the Bundeswehr and the Belgian army.

A number of options are provided in this model set, which represents the L2AE in its with-winch configuration. Two basic versions are provided, a first for integrated printing using an SLS resin printer, and a second, disassembled version for FDM printers. These are made available in separate zip files, with two files covering the SLS open back and tilted versions.

Four SLS files are provided, with optimised and strengthened versions for both the open-back and covered trucks.

The disassembled versions for FDM printing comprises of the following parts:

The model files were generated on Microsoft 3DBuilder, and run through ideaMaker to reduce or eliminate the number of non-manifold or wrongly oriented faces before posting. The designs have been optimised for 1:100 scale (or larger) printing, but are unlikely to work well at smaller scales e.g. N-gauge, and almost certainly will not print properly at 1:200 scale.

Be the first to review “MAN630E cargo truck” Cancel reply