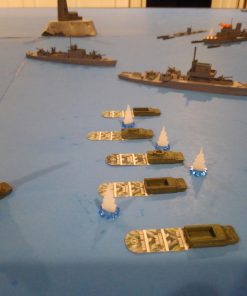 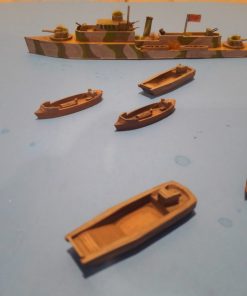 A battalion of LVTs was ready for 1st Marine Division by 16 February 1942. The LVTs saw their first operational use in Guadalcanal, where they were used exclusively for landing supplies. About 128 LVTs were available for the landings.

The USMC recommended development of an LVT armed with a 37mm gun and three machine guns and armored against 0.50 (12.7mm) machine gun fire. Development was slow and ultimately involved a complete redesign of the LVT, the LVT-2 Buffalo. Armored versions were introduced as well as fire support versions, dubbed Amtanks, which were fitted with turrets from Stuart series light tanks (LVT(A)-1) and Howitzer Motor Carriage M8s (LVT(A)-4).

Q: Which files does this product include? I'm a bit confused as it mentions Japanese crafct as well as the various LVT variants.

A: HI, Thanks for your purchase! I have updated the text with included files! You get the dice (2 files), 2 different Japanese landing craft, and 3 variants of the LVT! I hope you like them!