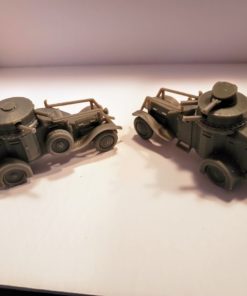 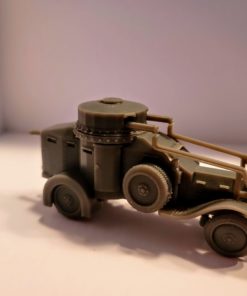 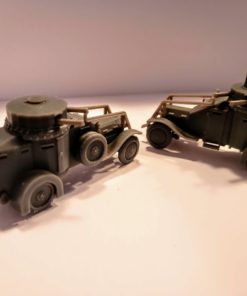 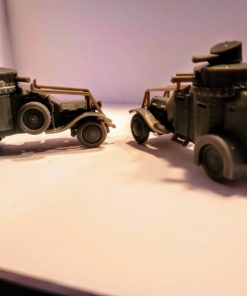 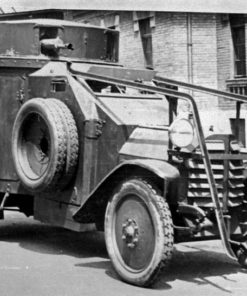 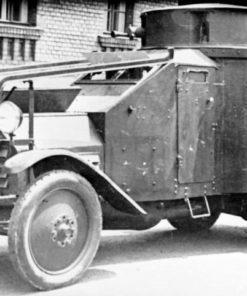 War accelerates the pace of weapon development while ensuring that those advances render serving designs to a short service life, sometimes measured in mere months before advances makes the design obsolete. To encounter an armoured vehicle that was not only in service at the start of the war and continued for the duration, but which actually served in the Great War as well is an anomaly limited to the ubiquitous Rolls Royce Armoured car and to this entry, the Lancia 1Z / 1ZM armoured cars.

The 1Z first saw serve in the Frist World War, having actually been ordered into production before Italy’s entry into the war on the side of the Allies in May of 1915. These armoured cars were built on the chassis of a Lancia truck and were powered by a 35 hp engine. They were armed with three 6.5mm (later change to 8 mm MGs) in the curious stacked turrets arrangements. This arrangement was later modified to a single turret with two MGs and a third MG mounted to the vehicles rear. The Bolt Action reinforced platoon listing provides both options.

The Lancia 1Zs saw extensive service in that war, engaged against the Austro-Hungarians and Germans. After the war the Lancias saw further service in the Italian colonies, engaged in actions against rebels in Libya and Italian Somaliland. They were also supplied in small numbers to Czechoslovakia, Hungary, Albania, and Afghanistan.

The Lancias were engaged in the Italian invasion of Ethiopia, and also served with Italian forces who fought with General Franco’s Nationalist army in the Spanish Civil War.

When Italy joined Germany in the Second world war in 1940, the Lancias, although clearly obsolete, were again pressed into front line service, and served in the Western Desert and in security duties in the Balkans after the defeat to Yugoslavia and Greece. Following Italy’s capitulation, the Lancia 1ZMs in the Balkans were taken over by the Germans, who continued to use them in anti-partisan duties.

This service life – extending through two world war, together with multiple interwar conflicts, and under the colours of a half dozen nations, was accomplished by an AFV whose production run only went to approximately 150 models. An impressive feat by any measure.

This .stl pack is only suitable for resin printing. I spent a lot of time trying to make it suitable for FDM, but I couldn’t do it in a way that would provide a suitable result. Even in resin, I overbuilt parts – such as the unique wire cutters on the upper front – as I prefer a slightly oversized part to a broken part.

There are two folders in the .stl pack; the base .stls and pre-supported and pre-hollowed parts. These files may not be suitable for your printer and resin settings, and if you are re-sizing this model to a different (from 1/56th) scale I recommend you do not use the presupported .stls as the rescaling will also rescale the supports.