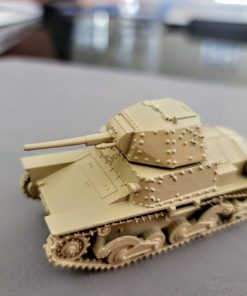 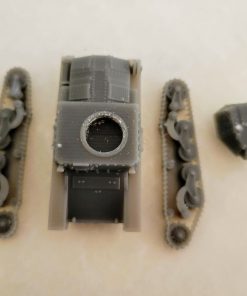 The L 6/40 light tank was the primary Italian light tank in WW2. That said, due to Italy’s deficit in heavy manufacturing the L6 served in the role of medium tank and was the heaviest tank with the sizable Italian contribution to Operation Barbarossa.

Although not a bad design for 1940, it was soon obsolescent, but served none the less with Italian forces in north Africa, Russia, the Balkans and later by the Germans, who pressed them into service after the Italian capitulation.

In the game of Bolt Action, the L6/40 is equivalent to the German Pz II – an 8+ armour AFV with an autocannon and coax MMG; not a bad piece of kit at all.

This file was a re-work of KPI’s file form Thingiverse, and I thanks him for his efforts. The track and hull were strengthened, and the turret and gun reworked.

It is intended for resin printing only. Although it may work for FDM, I have not tried it, and the tracks in particular are quite fine.

There is a pre-supported .stl folder. As always, be aware that support settings are not universal, and these may not work on your machine / resin / settings.

Clean support material off with care and test fit before assembly. The tracks are very thin so hold them as the glue sets to ensure proper alignment.