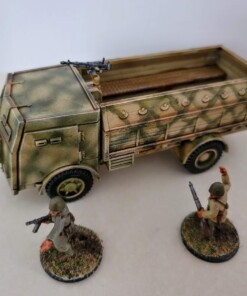 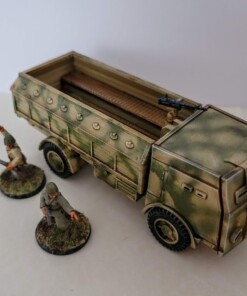 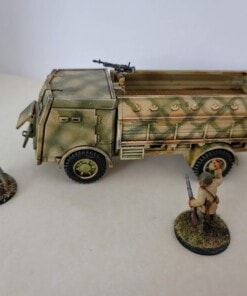 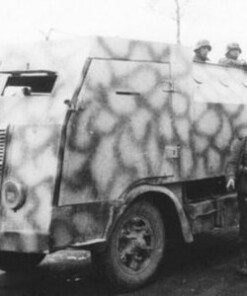 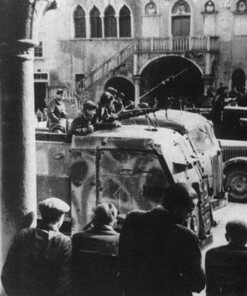 If you look past the lame memes of the Italian Army in World War 2, you find that while they were woefully ill-equipped, the Italians displayed incredible resourcefulness in making the most of whatever they could get their hands on. We see this in their potent “gun trucks” of the Western Desert, armed with light autocannons or howitzers mounted on domestic or captured Allied trucks. The Lancia 3RO even mounted a 100mm medium howitzer, making it a monster “technical”.

When it came to armoured troop carriers, the Italians did have a small number of specialized armoured carriers with the Autoprotetto AS.37. This wheeled carrier allow 8 men (as per Warlord Game’s parameters) to travel into combat with some armour protection.

However, due to Italy’s lack of natural resources and limited industrial base, only 200 or so AS37s were completed, and the demand for an armoured transport was unfilled, particularly in anti-partisan duties in the Balkans.

To answer this, the Italians adapted existing medium and heavy trucks, adding ad-hoc armour to the existing chassis. There are multiple examples, based on Renault, Dovunque, and Fiat chassis. One of the most prolific conversions was to the Fiat 665 heavy truck. The basic truck was a robust four-wheel drive transport. The 665NM Protetto went beyond the ad-hoc armoured truck format, and included an armoured cab, (the cab roof was left ‘as is”), with an open armoured passenger box. Unusual for the time the 665NM had weapon ports for the passengers to fight from within the vehicle. Over 100 models were produced, and it served with the Royal Italian Army, and post capitulation, with the R.S.I. and the Wehrmacht.

Although not currently covered in the Italian Army list, this vehicle is featured in diorama photos featured in the Bolt Action “Soft Underbelly” Campaign book (see page 2 and 80) and I would expect that was a subtle hint of what is forthcoming.

Until we receive the book late this year, I would propose the 665NM Protetto would be costed, as a regular, as

This .stl pack offers separate packs for both FDM and resin printing. The FDM .stls have separate front and rear axles, and the FDM version has the rear passenger box designed as two parts, for better build plate adhesion and less support material being required. It is a large print – the 655NM measured almost 7.4 metres long – the length of a Churchill tank! and the hull of the model is 140mm long, just barely fitting on my x1 printer build plate.

Both FDM and resin .stls have the rear passenger box as a separate part, as it makes for easier painting, post print. The .stls for the optional Breda MMG have both resin and FDM .stls, with a simpler print for FDM, allowing better build plate contact. It friction fits into a slot within the passenger box, and can be added and removed with issue, depending on how you chose to bring the vehicle into the game.

This pack includes both the basic .stls plus pre-supported .stls. The pre-supported .stls may not be an ideal fit for your own printer / resin / settings.
Post print, clean the supports off carefully, there are delicate parts in this model. Test fit parts prior to gluing.

FDM printing needs to be done at 0.1 mm layers, with full supports.

In this case be aware the FDM passenger box has two parts; the lower part is upside down on the build plate – please print it like that – it ensures a much easier job cleaning supports off. then glue the upper part of the passenger box to the lower section. There are no assembly guides, as they would have affected build plate contact.

The completed passenger box snaps into the lower hull.

The spare tire slides into a slot below the rear tail gate.