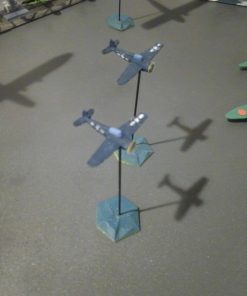 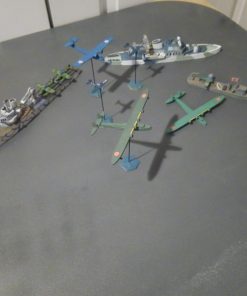 he Grumman F4F Wildcat is an American carrier-based fighter aircraft that began service in 1940 with both the United States Navy, and the British Royal Navy where it was initially known as the Martlet.[2] First used in combat by the British in the North Atlantic, the Wildcat was the only effective fighter available to the United States Navy and Marine Corps in the Pacific Theater during the early part of World War II in 1941 and 1942

The Wildcat was generally outperformed by the Mitsubishi Zero, its major opponent in the early part of the Pacific Theater, but held its own partly because, with relatively heavy armor and self-sealing fuel tanks, the Grumman airframe could survive far more damage than its lightweight, unarmored Japanese rival.[20] Many U.S. Navy fighter pilots also were saved by the Wildcat’s ZB homing device, which allowed them to find their carriers in poor visibility, provided they could get within the 30 mi (48 km) range of the homing beacon.[21]

In the hands of an expert pilot using tactical advantage, the Wildcat could prove to be a difficult foe even against the formidable Zero.[22] After analyzing Fleet Air Tactical Unit Intelligence Bureau reports describing the new carrier fighter, USN Commander “Jimmy” Thach devised a defensive tactic that allowed Wildcat formations to act in a coordinated maneuver to counter a diving attack, called the “Thach Weave.”[23] Nevertheless, the most widely employed tactic during Guadalcanal defense was high-altitude ambush, where hit-and-run manoeuvres were executed using altitude advantage. This was possible due to early warning system composed of Coastwatchers and radar.[24]

Four U.S. Marine Corps Wildcats played a prominent role in the defense of Wake Island in December 1941. USN and USMC aircraft formed the fleet’s primary air defense during the Battles of Coral Sea and Midway, and land-based Wildcats played a major role during the Guadalcanal Campaign of 1942–43.[8] It was not until 1943 that more advanced naval fighters capable of taking on the Zero on more even terms, the Grumman F6F Hellcat and Vought F4U Corsair, reached the South Pacific theater.

I had full confidence in my ability to destroy the Grumman and decided to finish off the enemy fighter with only my 7.7 mm machine guns. I turned the 20 mm cannon switch to the “off” position, and closed in. For some strange reason, even after I had poured about five or six hundred rounds of ammunition directly into the Grumman, the airplane did not fall, but kept on flying. I thought this very odd—it had never happened before—and closed the distance between the two airplanes until I could almost reach out and touch the Grumman. To my surprise, the Grumman’s rudder and tail were torn to shreds, looking like an old torn piece of rag. With his plane in such condition, no wonder the pilot was unable to continue fighting! A Zero which had taken that many bullets would have been a ball of fire by now.

Be the first to review “Grumman f4f Wildcat” Cancel reply