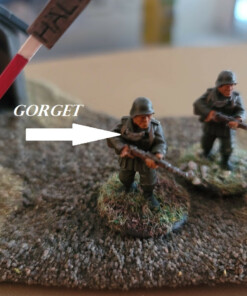 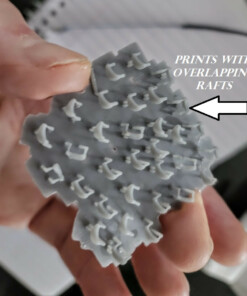 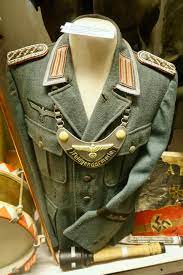 To mangle an overused adage, when the FAQ closes a door, an .stl can open a window.

The September Bolt Action Errata/FAQ effectively nerfed the shirker rule, mandating that double pins apply to all shirker units. This caused many players to revisit their lists, as this made shirkers into very fragile units.

But although that door seemed solid, there remains a window open for the German player, in the Feldgendarmerie Squad, the Field Police. Less charitably, they were commonly known among the ranks as Kettenhunde (English: “chained dogs”), due to the large gorget they wore around their neck as an identifier. Having a Feldgendarmerie Squad within 6” of a Shirker squad causes that squad to lose the Shirker rule. (** Please refer to the Road to Berlin Theatre boom for this rule reference **) This is pretty significant, as a five-man 50 point Feldgendarmerie squad can essentially upgrade two or even three Shirker squads depending on how you place them.

The Feldgendarmerie gorget was a silver-coloured plate with the requisite German eagle and scroll beneath it.

The recently released Zero Two Hundred game has well modeled Field Police, and Wargames Atlantic is releasing the same figures. However, this .stl provides another option; you can print the Field Police Gorget model off separately (I recommend doing them in a “sheet” as in the photo, due to the print’s small size) or merging onto a figure in 3DBuild or similar CAD program.

The model in the photo is a Trenchworx German figure on which I merged the Gorget. Please spare me any comments as to my choice of colours/painting, as I don’t field Germans on the table and only purchased and printed the model as a test and demo piece.

This .stl is only suitable for resin printing, and even at that needs to be treated carefully, due to the minute size of the actual print (approx. 4mm x 2 mm x 1 mm). The files have separate .stls, a thicker one to allow merging with the surface of a figure in CAD, and one with a concave back to allow it to be secure to an existing physical model.

The .stls in this file are for specific purposes –