** The original file has been updated ( version 3 – November 2020) – it is a reworked file and now has a one piece print for resin printing in addition to the original FDM file, a better defined hull, new wheels, and the parts run through Netfabb and the errors corrected. As well, I have left it to the user as to which side to mount the LMG. I initially thought it was mounted on the driver’s right, but now believe it was on the driver’s left (right hand drive). I haven’t been able to locate photos of the VUDB with an LMG mounted that show the actual location (side profile drawing show it mounted but only from the side). As such i have the driver’s opening and a second opening, it will fit into either.**

** this file was intended for FDM printing, and thus is a multi part print, to optimize “flat to the build plate” printing **

This file is for a 28mm scale French VUDB wheeled troop carrier. The file is a rework of Jarlang’s 1/72nd scale version https://www.thingiverse.com/thing:2429266

That file required a a bit of work; in addition to upsizing it to the true 1/56th size (reference https://www.quartermastersection.com/french/afvs/608/BerlietVUDB), I 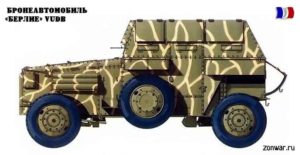 The Berliet VUDB (Voiture de Prise de Contact) is arguably the world’s first I.F.V. – Infantry fighting Vehicle. It was more than just an armoured troop transport but instead was built with the ability for the occupants to fight from inside it; with multiple weapon ports on the front, side and roof.

In Bolt Action it is one of the few (if not only) armoured transports that is not open topped. The game rules allows it to carry 7 men, and it can be armed with an LMG firing to the frontal arc. so armed, as a regular, it would cost 69 points. It is available to the French in the 1940 campaign as well as in north Africa. It is also available to the Belgians in 1940.

This .stl is optimized for FDM printing. I strongly suggest 0.1mm layers, with supports. Please clean the supports carefully and test fit before gluing. The LMG is small, you can glue it in the recess on the front or slid it in and out as you wish. I would glue it to prevent loss.

This .stl is optimized for resin printing. The painted model in the pic is the resin print, printed at 0.05mm with Elegoo standard resin on an EPAX X1.