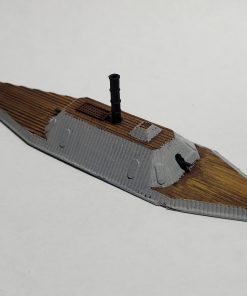 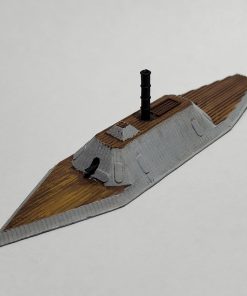 CSS Neuse was built along the bank of the Neuse River in North Carolina. She was the sister to CSS Albemarle, being built in tandem on the Roanoke River, and was very similar in construction. The main difference between the two boats was the addition of four additional gunports on Neuse giving her a total of ten. She was armed identical to Albemarle, with two double-banded 6.4-inch Brooke rifles mounted on the centerline. She was launched while still needing fitting out with engines and armor, but received them sometime later. Like Albemarle, she was promised to be the scourge of the North Carolina sounds, but unlike Albemarle she would never get this chance. Her crew was conscripted from the Army, meaning they were drastically inexperienced to be crewing an ironclad. Because of this, she ran aground while maneuvering around Kinston and was stuck for more than a month. Once she was finally refloated, she served as nothing more than a floating ironclad battery due to lack of shore support. When the Yankees put Kinston under siege, Neuse was destroyed to prevent her capture, she sank in the river and all of her valuable fittings were stripped. She remained buried under the river mud for almost 100 years until she was discovered and raised in 1963. The remains of her hull are now on display in Kinston, making her one of only four surviving Civil War ironclads. She also has a full size replica on display in downtown Kinston.

CSS Neuse with base

Be the first to review “CSS Neuse” Cancel reply