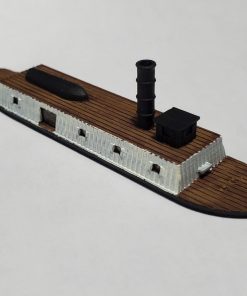 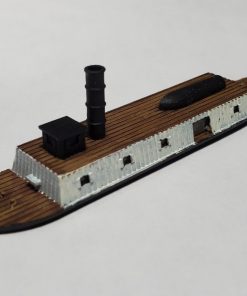 Flagship of the RDF!

Originally a steamer on the Mississippi, she was acquired by the Confederate Army in 1862. She was converted into a warship with the addition of cotton bales to protect her engine and an oak ram sheathed in 1″ iron. In May 1862, she and the rest of the River Defense Fleet attacked Union rams and gunboats at Plum Point Bend on the Mississippi River. She didn’t get the opportunity to get close enough with her ram, but she was able to support the other ships with her guns. After the success at Plum Point Bend, the fleet withdrew to Fort Pillow, holding off the Union fleet until it was evacuated on June 1, and then withdrew further downriver to Memphis to take on coal. Six days later Little Rebel was part of the Battle of Memphis. Low on coal, low on ammo, and no desire to surrender the only option was to fight. While making an attack on USS Monarch, fire from the gunboat USS Carandolet punctured her boiler leaving her dead in the water. She was then hit by Monarch, run aground, and forced to surrender. After the battle, she was repaired and entered Union service until the end of the war when she was returned to civilian duties.

CSS Little Rebel with base

Be the first to review “CSS Little Rebel” Cancel reply