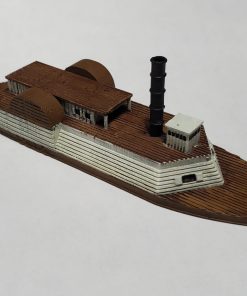 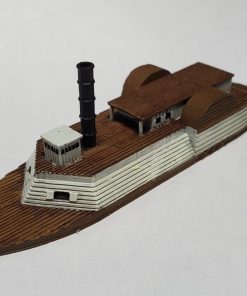 CSS Sumter originally operated as the towboat Junius Beebe before being taken into Confederate service and fitted out as a ram. She would be part of the River Defense Fleet and took part in the battle along with the rest of the fleet. At Plum Point Bend, commanded by Raphael Semmes of later CSS Alabama fame, she knocked out a Union mortar barge that was firing on Fort Pillow. She took part in the crippling of USS Cincinnati alongside CSS General Sterling Price at the Battle of Fort Pillow, and damaged the gunboat USS Mound City before she was rammed by CSS Van Dorn. When she and the rest of the fleet were trapped at Memphis, she gallantly steamed out and fought with the fleet till the end. She seriously damaged the Union ram Queen of the West before being forced aground on the Arkansas shore. She was soon refloated and placed in to Union service for a short time. Her career would end when she ran aground just south of Memphis. She was abandoned, and used as a source of spare parts before being destroyed by Confederate authorities.

CSS General Sumter with base

Be the first to review “CSS General Sumter” Cancel reply