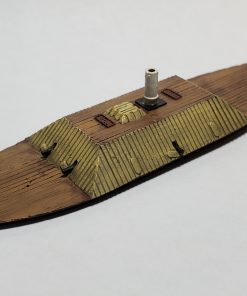 CSS Columbia was launched in March 1864 in Charleston and was part of the fleet stationed there. She did even less than her fleet members, being built and launched after most of the naval actions against Charleston had subsided. When the Union army captured the city in 1865, Columbia was found grounded on a wreck near Fort Moultrie stripped of her guns and most of her armor, her hull had also been badly damaged by shipworm. The Yankees raised her and towed the hulk to Hampton Roads and began repairs for…some reason. These repairs never went anywhere and her hulk was sold for scrap in 1867.

CSS Columbia with base

Be the first to review “CSS Columbia” Cancel reply