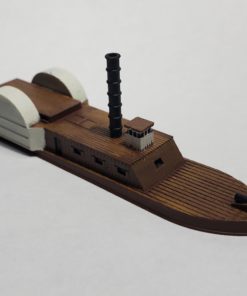 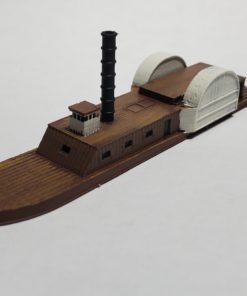 Another boat lost at Memphis!

Originally built in Cincinnati as Hercules, the vessel was acquired by the Confederate Army in 1861 and almost immediately converted to a cottonclad ram and renamed CSS Colonel Lovell. She would then become part of the River Defense Fleet fighting on the mighty Mississippi River. She would venture out with the rest of the fleet to attack the Yankee ironclads at Plum Point Bend and assisted in the incapacitation of two of the enemy ironclads. She would then fall back with the fleet to cover the retreat from Fort Pillow. Once the fort was abandoned, the fleet withdrew downriver to Memphis in search of coal. With no coal to be found at Memphis and nowhere else to run, Col. Lovell and the fleet were forced to fight. Col. Lovell would be fatally rammed by two Yankee rams after one of her engines malfunctioned. She sank in the deep water part in the middle of the Mississippi and may or may not remain there today.

CSS Colonel Lovell with base

Be the first to review “CSS Colonel Lovell” Cancel reply