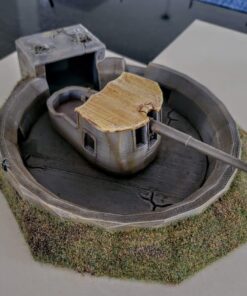 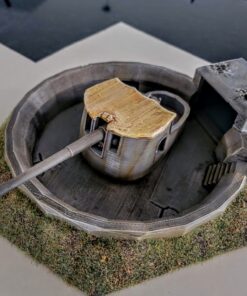 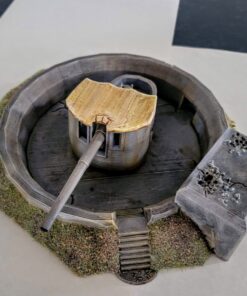 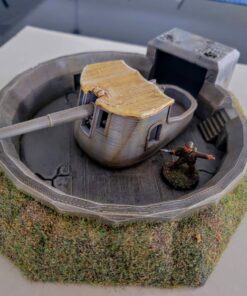 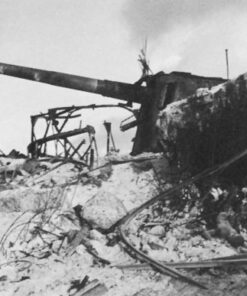 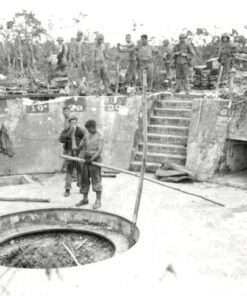 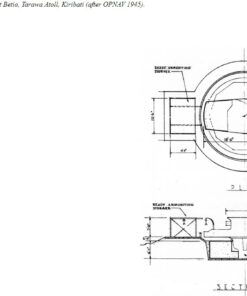 This is an .stl pack to allow you to print a coastal gun emplacement. It is scaled to 28mm wargaming but can be downscaled down to 15mm successfully.

Coastal defence guns were a common feature in warfare, and although less common, are still in use in in a limited scale even today. This .stl pack fulfills two roles – one is as a representation of the Japanese 8” gun emplacement located on the island of Beito (part of the Tarawa chain), in the Gilbert Island chain, and secondly as a generic coastal defence gun for use in other theatres of action.

Coastal defence guns are not simply field pieces placed in a bunker, but are purposely designed heavy guns in concrete emplacements, normally with powered traverse and complex fire control systems. The Imperial Japanese foresaw the strategic value of the Gilbert Island chain running near the equator. Although the islands were barely above sea level, there were ideally suited as air strips. The Japanese invested heavily into turning Beito Island into a mini-Gibraltar, and it was a virtual porcupine bristling with guns by the time the American invasion fleet came into view in November 1943. The defences included fourteen coastal guns of various calibres, the most significant being four Vickers 8” gun manufactured for Japan at the time of the Russo-Japanese war (1904/1905). Despite the immense preinvasion bombardment, one of the four 8” guns remained in action into the second day of this cataclysmic battle.

This model is based on one of those gun emplacements. There are photos post-battle, as well as current day photos and a lengthy video on YouTube which I used to create this file. The effects of the sea, environment degradation on the island, and time has resulted in most of the emplacement being washed away, but at least on the guns remains intact. An online article by Dirk H.R. Spennemann was the source for the design I used for this model.

I had to under scale the model by approximately 10 % to ensure it would fit on the build plate of most FDM printers – the model measures 235 mm x 195 mm. The gun mount and turret can be printed in either FDM or resin, there are .stls for both.

The features on the model are derived from the various sources I noted previously, e.g., there are references to the canvas top over the gun turret (photos post-battle show the turret interior as in shade, but this evidently was the canvas cover, the current state of the turrets also show no permanent roof). The two recesses along the walls of the gun emplacement are visible in other post-battle photos. I do not know if their purpose was for the crew to shelter in or for storing charge bags.

Although modelled after the Beito emplacements, this model is suitable to represent most other situations you may want a coastal gun position on the table, be it as an objective, to help balance the defenders point totals in a scenario, or just as eye candy. I finished the test print with the flocking of a temperate climate, as it is more likely to see use on such a table. As a point value it would be a heavy howitzer (akin to the Soviet B-4 203 mm gun) and be under heavy cover.

There are files included for

If you have any questions, concerns or difficulties, please contact me at deweycatproductions@gmail.com