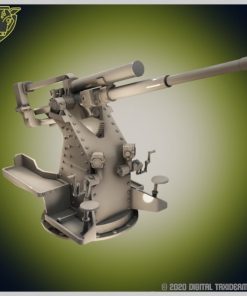 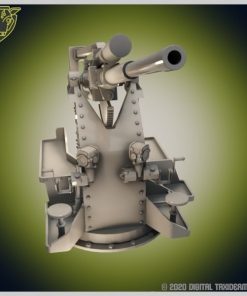 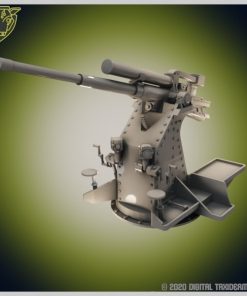 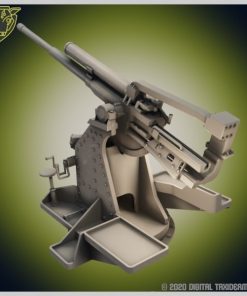 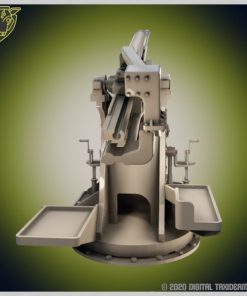 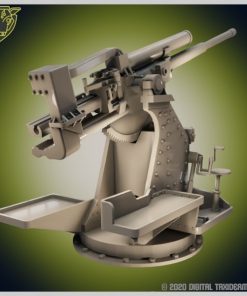 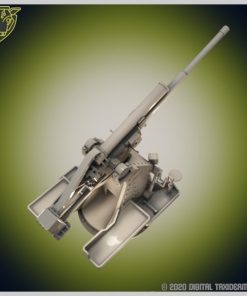 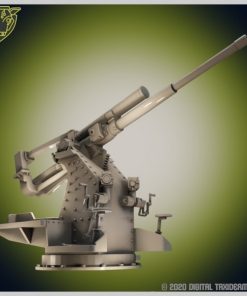 This is a detailed reproduction of a British quick firing 3.7 inch anti-aircraft gun.

The QF 3.7-inch AA was Britain’s primary heavy anti-aircraft gun during World War II. It was roughly the equivalent of the German 88 mm FlaK and American 90 mm, but with a slightly larger calibre of 3.7 inches, approximately 94 mm. Production began in 1937 and it was used throughout World War II in all theatres except the Eastern Front. It remained in use after the war until AA guns were replaced by guided missiles beginning in 1957.

In 1934, Vickers Armstrong produced a mock-up and proceeded to develop prototypes of the weapon, which was selected and passed acceptance tests in 1936.[7][8] The weight specification was exceeded, the muzzle velocity not achieved and the mechanical time fuze, No. 206, was still some years from production. The igniferous No. 199 had to be used and its lesser running time limited the effective ceiling. Gun production started the following year.

On 1 January 1938, the British air defences had only 180 anti-aircraft guns larger than 50 mm and most of these were the older 3-inch guns. This number increased to 341 by the September 1938 (Munich Crisis), to 540 in September 1939 (declaration of war), and to 1,140 during the Battle of Britain. Production continued until 1945, averaging 228 guns per month throughout the period. Guns were also manufactured in Australia.

This STL file is highly detailed which means it is best suited to RESIN printing, It is possible to print with an FDM printer however you may loose some finer detail. The hardest parts to reproduce in FDM are the handles, everything else prints just fine, these handles are included for authenticity however as a scale model they cause an issue for FDM reproduction. The only other alternatives would be to model them much larger than scale or to not included them.

Supports are required for this model.

It is designed for 28mm table top games set in WW2 such as:

Bolt Action, Chain of Command and Konflikt ’47. It can also be used in games such as Judge Dredd, Dust 1947, Necromunda, and Fallout Wasteland Warfare.