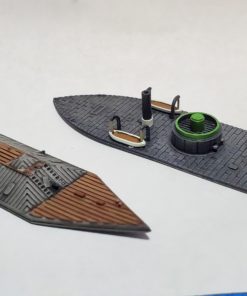 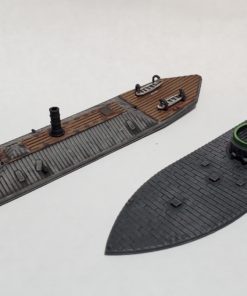 Report an abuse for product Battle of Wassaw Sound Set

The Battle of Wassaw Sound was really more of a turkey shoot than a battle. The now completed CSS Atlanta steamed into the sound with the same goal as almost every other ironclad built by the Confederacy, break the Yankee blockade. The commander in charge of naval forces in the area, Rear Admiral Francis Du Pont, would learn that Atlanta was preparing to make her attack on the blockade and sent two monitors, USS Nahant and USS Weehawken, to stop her. As Atlanta entered the sound, she planned to use her spar torpedo against Weehawken, and hammer Nahant into submission with her powerful guns. This plan almost immediately went out the window as she soon ran aground while maneuvering. The monitors soon closed until they were at point blank range and opened fire. When she ran aground, Atlanta swayed to an angle that made it almost impossible to fire back, due to having unusually narrow gun ports, she was a sitting duck. Needless to say, it didnt take long for the Atlanta to surrender and be taken as a prize.

This ship is modeled in 1/600 scale and can be printed using any resin or FDM printer. This model can also be printed at 1/1200 scale. Ship comes with and without base.

When printing in FDM or at 1/1200 scale, some details may be too small to print.