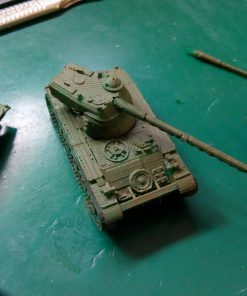 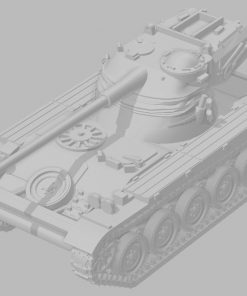 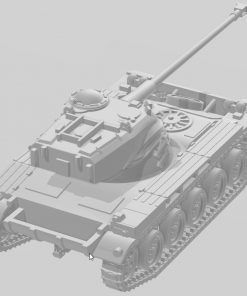 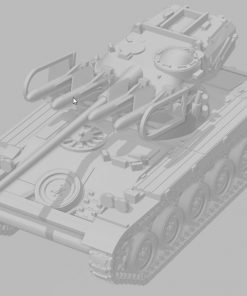 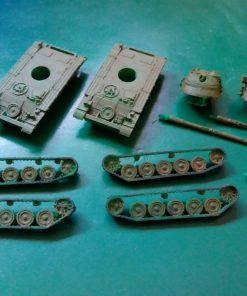 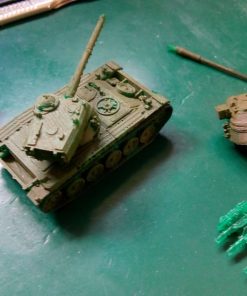 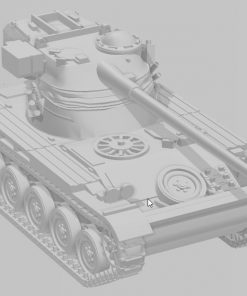 The AMX-13 is a French light tank produced from 1952 to 1987. It served with the French Army and was exported to more than 25 other nations, including Holland, India and Israel. A range of turrets are provided with different calibre weapons, together with a version mounting the SS-11 missile.

The AMX-13 is a French light tank produced from 1952 to 1987 was named after its initial weight of 13 tonnes, and introduced a tough and reliable chassis. It was fitted with an oscillating turret built by GIAT Industries with revolver type magazines. The initial version was fitted with a 75mm gun, reputedly derives from that mounted on the German Panther, but this was upgraded to a 90mm F3 medium pressure gun. A 105mm variant was offered for export, and was used by the Dutch.

Including prototypes and export versions, there are over a hundred variants including self-propelled guns, anti-aircraft systems, APCs, and ATGM versions. This offering includes a range of turrets, and will be extended in the future. Major derivatives such as the Mk61 SPH, the VCI and others are or shortly will be available as additional designs. The tank is still in service in a much modified form in Singapore.

Further information is readily available on several web sites, including https://tanks-encyclopedia.com/coldwar/France/AMX-13.php and http://www.army-guide.com/eng/product1390.html.

Excerpts from a very interesting and detailed book on the tank (by Robinson et al.) can be found at https://www.amazon.co.uk/AMX-13-Light-Tank-Complete-ebook/dp/B07K544Y8Y. This book is highly recommended as a reference and to assist in modelling the vehicle at particular times in its service.

Two variants of the design are included, one for resin printing and a second for FDM printers. Both have separate, rotating turrets. The FDM version has separate hull and tracks to suit the limitations of the FDM technology. Tracks are best printed flat on the build plate, with the outside facing up. Three turrets are provided, one representing the original 75mm gunned version, a second with the 90mm gun, and a third with the export 105mm weapon. A fourth turret with the SS-11 missile installation is offered, but this difficult to print and remove supports on FDM printers. The SS-11 installation is offered separately as an option that can be mounted on the 75mm gunned turret. Two variations of the hull are offered, one with two and with four return track rollers, as used in different production batches. These can be identified by the file names.