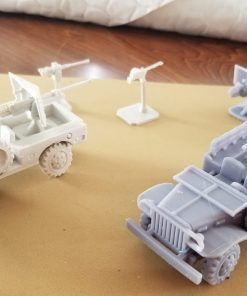 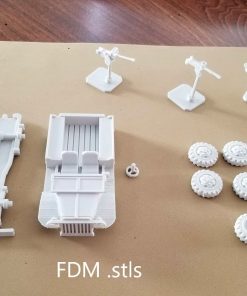 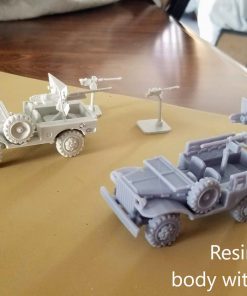 The American military entered WW2 with the backing of the world’s largest motor vehicle manufacturing base. We are all familiar with the ubiquitous ¼ ton jeep and the 2 ½ ton “Deuce and a half”. One vehicle often overlooked is the Dodge ¾ ton Weapons Carrier. This vehicle served on all fronts as well as being supplied to the Red Army as part of lend lease.

In addition, early in their participation in the war the Americans produced the M6 Motor gun carriage; a wheeled tank destroyer consisting of the Dodge weapons Carrier with a 37mm anti tank gun mounted facing the rear. These were produced in the thousands and saw service in north Africa and the Pacific theatre.

This package consists of separate folders with .stls specifically for both FDM and resin printing.

Each pack includes two hull – one with the passenger side rails on the truck bed and a second without the rails, intended for use with the M6

As well three weapon options for each are provided: a pintle mounted MMG, a pintle mounted HMG and the light ATG mount. All are mounted on a small base allowing them to be easily place in and removed in the print

FDM:
Print at fine setting with supports “everywhere”.
Remove supports carefully and test fit before applying glue. The lower suspension piece fits tightly into the upper hull, so be patient.
Take your time removing the support from the ATG gun shield. There is a gun sight that can be harmed. When fitting the gun barrel through the shield it is a tight fit but take you time and it will fit. There is a small notch in the gun mount that fits into a recess on the bottom of the gun barrel.
Resin:
Please note that the steering wheel has support on the lower part of the wheel. It will not be visible in use, but in test printing I found the steering wheel too easily broken when removing supports post print, so I erred on the side of caution by adding the reinforcement.