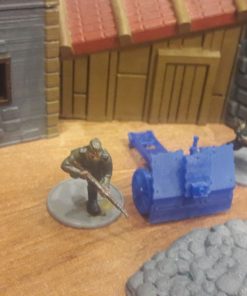 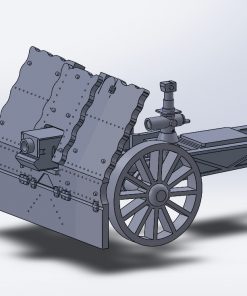 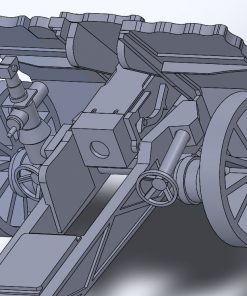 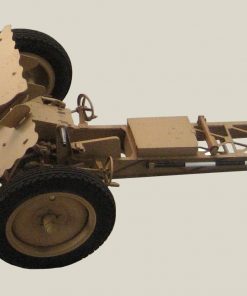 The 7,5 cm leichtes Infanteriegeschütz 18 (7,5 cm le. ig 18) was designed between 1927 and 1932 by Rheinmetall, to provide German infantry with a mobile and effective fire support weapon. Protected by an armored shield, the gun was an unusual, however functional design, with 12,000 manufactured between 1932 and the end of the war.

The 7.5cm le.IG 18 fired a roughly 12 pound (5.5-6 kg) 75mm high explosive shell out to 4,000 meters and was capable of both direct and indirect fire (elevation maxed out at 90 degrees). These guns would see service on all fronts with the German military in World War Two, remaining in service throughout the entire war.

The mechanical operation of the gun is rather intriguing for an artillery piece, with a fixed breech and a barrel that tips up from the muzzle for loading and ejection. This did not really convey any particular advantage, but it also did not have any particular weakness and was quite satisfactory in action.

This pack includes all details necessary to print and build an infantry support gun (le. IG 18) with wooden wheels in 28 mm scale. I`ve also done a bit of research on this gun – information is sparse, to say the least, and WW2 German artillery is fun, but complicated thing:)

The whole concept on this was to make it in gaming scale with working barrel controls – so you can sort of open and load (tiny) shell in it and unload it manually, but after many tries, I understood that in that scale it will be too fiddly, unfortunately.

This model was designed for tabletop gaming, so some details are rather enlarged or missing for sake of good and safe printing and use. The model was test printed on Elegoo Mars 2, presupported Chitubox file is also included. Model is intended for resin printing due to fine details, however, some details (like chassis and wheels) MAY print on FDM printers (not tested).