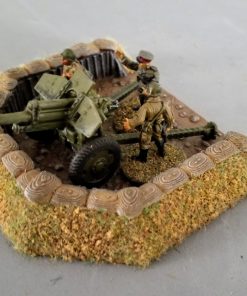 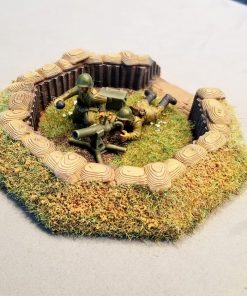 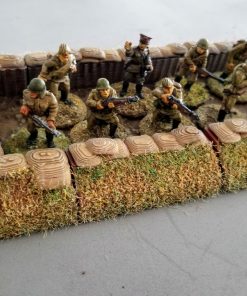 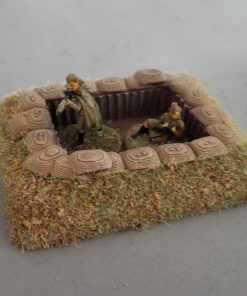 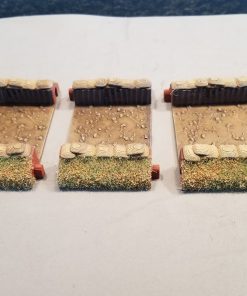 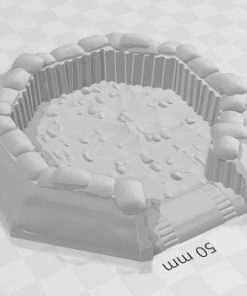 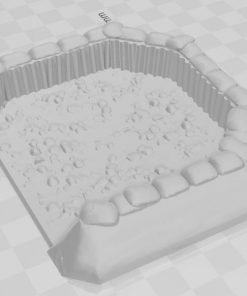 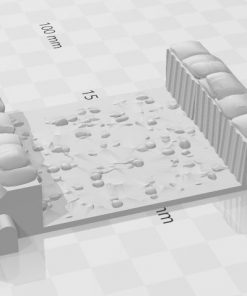 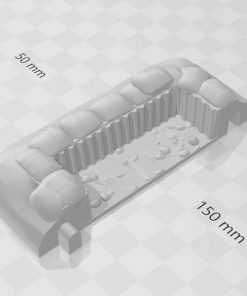 It is common in many Bolt Action scenarios that one player will start with game with some or all their forces “dug in”. This is a great advantage when those units are being fired upon (prep barrage notwithstanding). The rules allow these positions to be abandoned by the unit therein – perhaps to make an assault, or to “get out of Dodge” if things turn bad. The dug in positions can be reclaimed by the original unit, or other units, during game play.

Since Bolt Action is often a game of inches, there is an advantage to have something to marking the location of actual entrenchments. I thought it would be handy to have a system of “Dug In” game aids for units. A dug in sniper team or FOO would not dig a slit trench any larger than needed, while a twelve-man section would require a length bit of ground. Likewise, weapon teams and field guns require different sized dug outs. I wanted to minimize the footprint on the game table, but still have something that reflects an actual field entrenchment. Hence this package.

This system has four .stls – the first two are a system of interlocking end and middle pieces – two end pieces lock together to cerate a nice spot for a two-man team, while adding the middle sections will give you a trench as long as you need, allowing for double rows of 25mm based figures.

The gun pit gives you room for most light and medium guns, heavy mortars etc., while the team emplacement allows a 60mm based weapon team.

The trenches replicate an entrenchment with corrugated sheet metal sides and a border of sand bags. A coating on flocking on the outer face would complete the look.

The prints shown in the pics were printed rather crudely at 0.3mm. Results would be much better at a finer setting and/or using filler post print. I was in a bit of a rush as I needed them for a game and didn’t spend the time, I should have on them. Then again, it’s a game table not a diorama.

Report an abuse for product 28mm Wargaming Dug In Entrenchments

These .stls are meant for FDM printing. They can be printed at a fairly coarse scale.

Q: any chance of getting a middle section with an entrance on one side?

A: Sorry, I offered those up as a free download. There are quite a number of files within the pack, with a specific use within the Bolt Action rules etc. I don't foresee revisiting them to create more variations. I may do other emplacement files but they will be as part of "fee based" future downloads. Thanks for inquiring and I apologize if the current pack doesn't suit your needs.