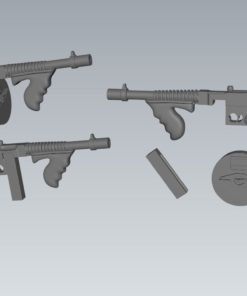 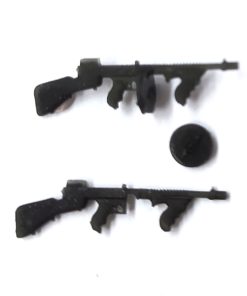 The Thompson submachine gun (also known as the “Tommy Gun”, “Chicago Typewriter”, “Chicago Piano”, or “Trench Broom”) is a blowback-operated, air-cooled, magazine-fed selective-fire submachine gun, invented by the United States Army Brigadier general John T. Thompson in 1918. It was originally designed to break the stalemate of trench warfare of World War I, but was not finished until after the war ended.

The Thompson saw early use by the United States Marine Corps during the Banana Wars, the United States Postal Inspection Service, the Irish Republican Army, the Republic of China, and the FBI (following the Kansas City Massacre).

The Thompson became notorious during the Prohibition era, used as a signature weapon of various organized crime syndicates in the United States in the 1920s. It was a common sight in the media at the time, and was used by both law enforcement officers and criminals.

It is the first weapon to be labeled and marketed as a “submachine gun”.

The zip file contains .stl files of the model with supported version if needed and a printer friendly chitubox version.

All the models are designed for resin printers.

We are a small design studio focused in 28mm WW2 miniatures, all our designs are ready to print in resin printers.